The privately run hotel with 50 rooms is situated next to the historic Marschiertor city gate and its central location makes it ideal for exploring the Altstadt, Aachen’s historic town centre. The main train station (Hauptbahnhof) is within easy walking distance of the hotel. We offer personalised comfort for business and private guests and are always glad to fulfil your particular wishes.

Please ask when booking or on your arrival at the hotel. We will be pleased to tell you where you can safely park your car.

Are you visiting the city on your bike? We have a safe and secure place for you to leave it.

Do you need an extra pillow or hypo-allergenic bed linen? Please let us know, we will be glad to cater for your needs.

Our conference room offers space for meetings with up to 30 people.

Please feel free to bring your four-legged friends with you when you visit our hotel. They are welcome to stay in your room with you at no extra cost.

The name of the city gate originates from the Marschierstrasse (marching street), which leads past the gate. In the local dialect, this street was called the Maschestross. The building of the Marschiertor began in 1257 and was completed in 1300. The historic structure was a key defensive position of the former Free Imperial City of Aachen and was guarded by soldiers of the city guard and militiamen. It is one of the four main gates of the city and the sole remaining southern gate of Aachen’s outer city wall. It was built as a fortified gate with a width of 23.80 m and two four-storey towers and guards a portal with a width of 4.80 m.

In the course of its history, it was besieged and occupied by various armies and later served as a junk room, a shelter for the homeless, a youth hostel and, under the National Socialist regime, as a home for the Hitler Youth movement.

In World War II, it was largely destroyed by Allied bombing in 1943, after which the city carried out only makeshift repairs. It was lovingly restored in 1964 by the ‘Stadtgarde Oecher Penn’, the oldest association of the Aachen Carnival, and is now used as their headquarters. 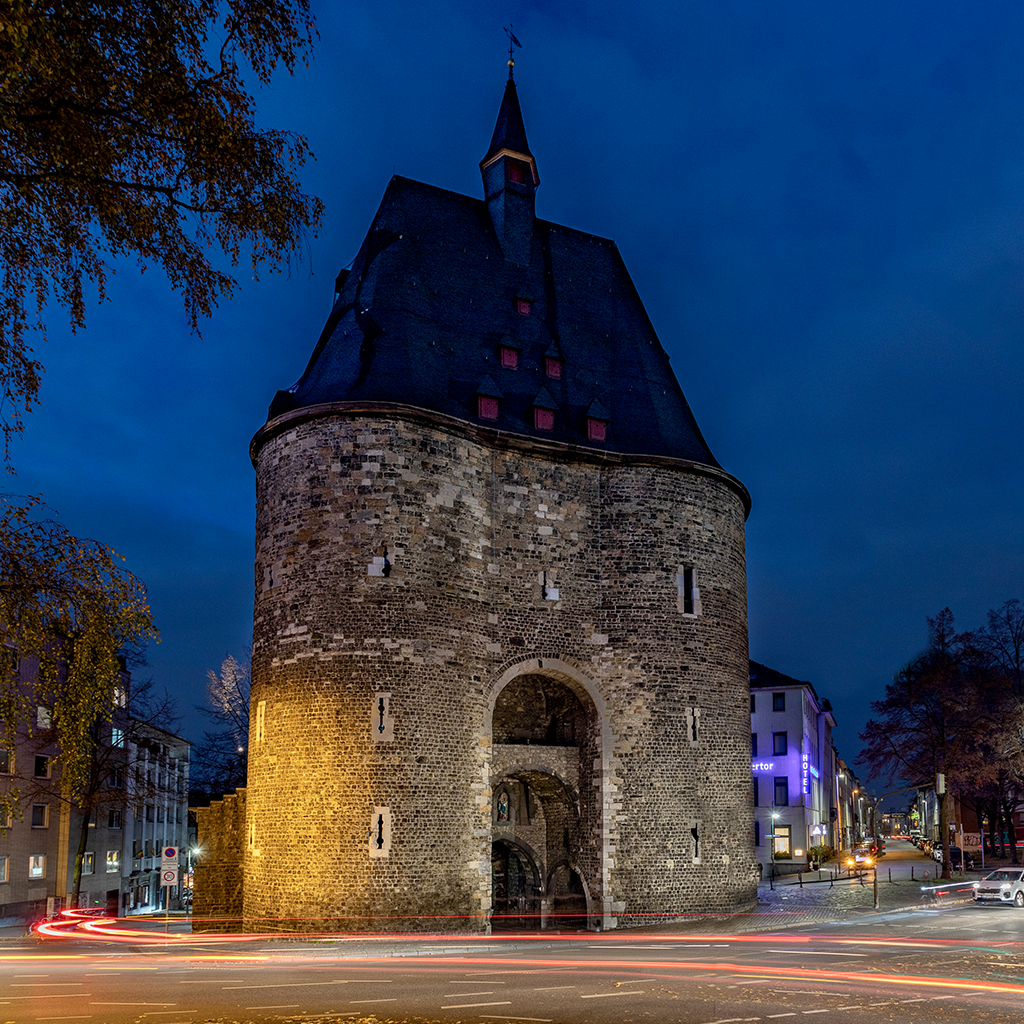 This website uses cookies to improve your experience while you navigate through the website. Out of these, the cookies that are categorized as necessary are stored on your browser as they are essential for the working of basic functionalities of the website. We also use third-party cookies that help us analyze and understand how you use this website. These cookies will be stored in your browser only with your consent. You also have the option to opt-out of these cookies. But opting out of some of these cookies may affect your browsing experience.
SAVE & ACCEPT

You can find out more about which cookies we are using or switch them off in settings.

This website uses cookies so that we can provide you with the best user experience possible. Cookie information is stored in your browser and performs functions such as recognising you when you return to our website and helping our team to understand which sections of the website you find most interesting and useful.

Strictly Necessary Cookie should be enabled at all times so that we can save your preferences for cookie settings.

If you disable this cookie, we will not be able to save your preferences. This means that every time you visit this website you will need to enable or disable cookies again.